Classic cars, hot rods or muscle cars are only some of the specialty and custom vehicle wraps we offer at Surf City Graphics. Whatever vehicle fulfills your need for speed, we have the team to make your wildest visions come to life.  Here at Surf City Graphics we do all of our design, prints and installations in house.  Being an in house design, print, and installation shop, allows us to devote the time, ingenuity and labor into which these vehicles deserve.

We design it, print it and install it...just the way you want it! 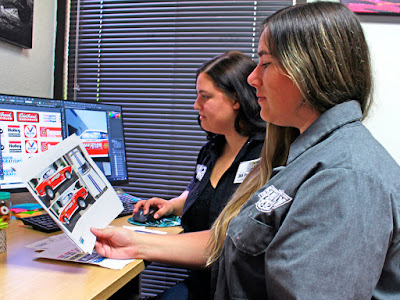 Design:  No two antique vehicles are alike. Therefore, we pride ourselves in being able to create specific templates that don’t exist in today’s design world. We start with a survey of your vehicle, take measurements and photos to create an individual template exact to your vehicle’s every curve and unique body lines. 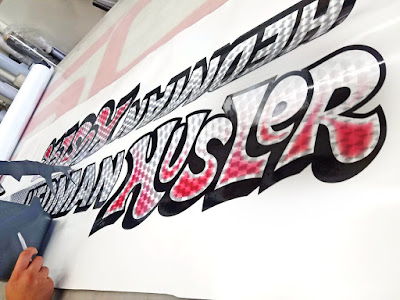 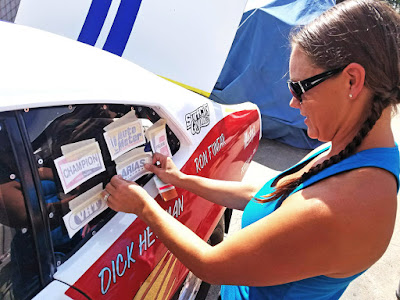 Installation:  Placement, an eye for detail, and patience are a must when it comes to installing custom vehicle wraps and graphics. Our installation process can take anywhere from a few hours to a few days, depending on the details and specifications needed for each vehicle. Your vehicle graphics are in good hands with our 3M certified installers…literally. 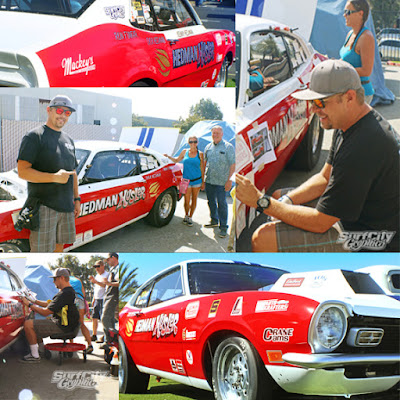 REVIVAL OF THE FITTEST. 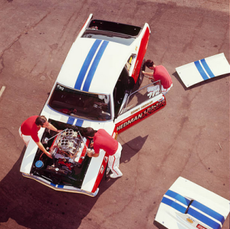 Photo from Hot Rod Magazine’s February 1972 article covering the Maverick [photo courtesy Peterson Archives]
“If you’re a header manufacturer, what better way to test and publicize your products than to run them on your own out of sight Pro Stocker,” read an article published in the February 1972 issue of HOT ROD Magazine.
The first Hedman Hedders Pro Stock Ford Maverick, campaigned by Kenny & Dick Hedman, was stolen the night of a big magazine awards banquet held at the end of the 1970 Indy Nationals. The motor was eventually found in a haystack in Greenfield, Indiana, but the body and chassis vanished into thin air, never to be seen again. Kenny Hedman, who is the son of Hedman Hedders founder Bob Hedman, would not let this setback end the team’s racing story, or hamper Hedman’s real-world product development. Kenny, Dick (Kenny’s brother), and the rest of the guys got to work on their next-generation race car— And the new “Hedman Husler” Maverick was reborn into Pro Stock competition.


Posted by Surf City Graphics and Vehicle Wraps at 10:17 AM No comments:

In honor of our fallen soldiers and our US Veterans, the volunteers at Dentists for Veterans and Surf City Graphics are happy to share with you these touching success stories that were recently featured on CBS News: 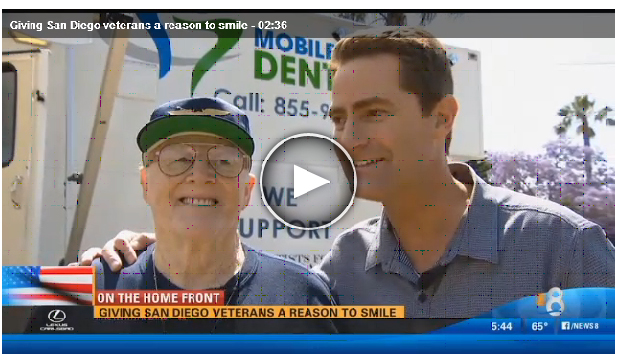 Extremely humbled to be able to give back and help out the Dentists for Veterans , a Non-Profit organization. Surf City Graphics was able to help out with their Mobile Dental Clinic graphics, Banners and other promotional products. Big thank you to Dr. Charles Zahedi, Sarah Boyd and Dentists for Veterans Team for the opportunity to give back and help out your great organization. 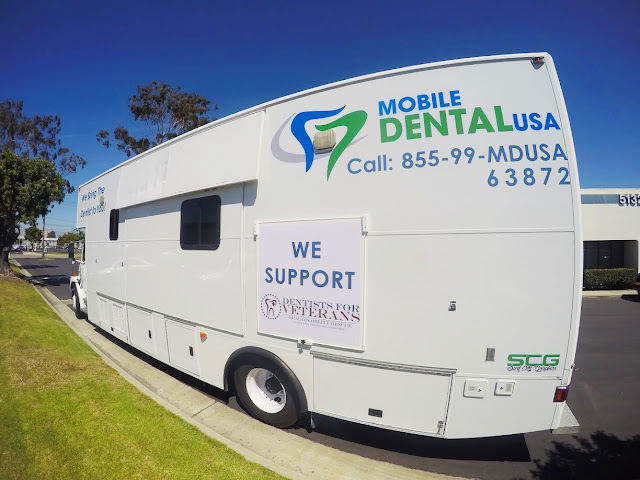 Posted by Surf City Graphics and Vehicle Wraps at 11:42 AM 2 comments: 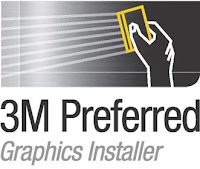 After 9 years of installation experience, 1 week of training, 14 hours of rigorous hands-on and written testing 3M recognizes Michael Dmytrow of Surf City Graphics as an accredited professional graphics installer. Being a 3M Preferred Graphics Installer demonstrates our commitment to providing you with the best graphics installation available. #KillingItDaily 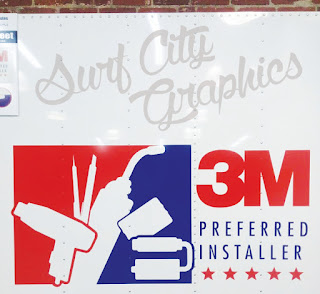 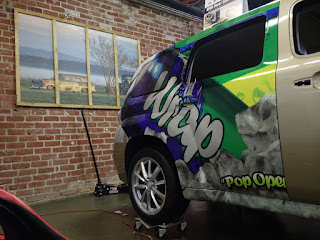 Absolutely thrilled to show off the latest issue of "SIGNS OF THE TIMES" Magazine and our 3 page spread.  Magazine link :  http://www.nxtbook.com/nxtbooks/STMG/sott_201510/index.php… 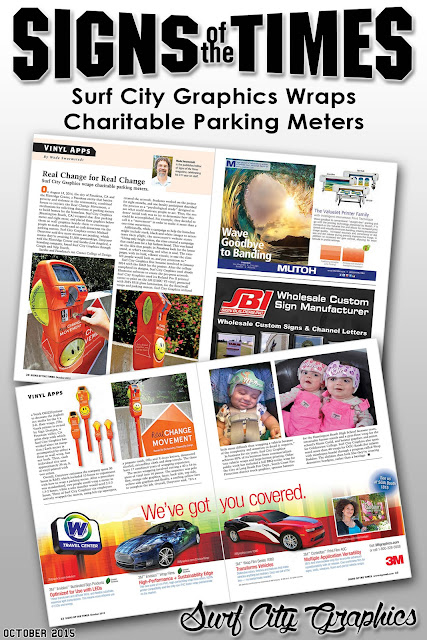 BIG thanks to 3M Commercial Graphics, Connor and Wade from Signs Of The Times for covering our "Real Change Movement" and DOC band wrap story. 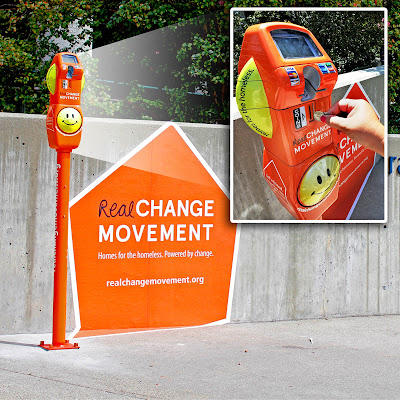 Surf City Graphics wraps charitable parking meters. On August 13, 2014, The City of Pasadena, CA and the Flintridge Center, a Pasadena entity that battles poverty and violence in the community, combined forces to initiate the Real Change Movement, a mechanism for creating homes for the homeless. Surf City Graphics (Huntington Beach, CA) wrapped that rst parking meter and eight more, and placed fl oor graphics below them to encourage people to make credit-card or cash donations via the parking meters. Surf City Graphics owner Michael Dmytrow said 5 more meters are pending ( total of 14 meters) , which means awaiting $1,500 sponsorship's.
Michael said the Flintridge Center and Saeshe (Los Angeles), a branding company, found Surf City Graphics through Google and Yelp Search. Saeshe and Pasadena’s Art Center College of Design created the artwork. Students worked on the project for eight months, and one faculty participant described the process as a “psychological study” designed to see what could motivate people to act. Thus, the students’ initial task was to try to determine how this could be accomplished. For example, they decided to call it a “movement” in order to make it more than a one-time occurrence. Additionally, while a campaign to help the homeless might include stark, black-and-white images to accentuate their plight, the movement’s website states “Using only bright colors, the class created a campaign that could pass for a hip fashion brand. This was based on the idea that people in Pasadena look for the latest trend, at what’s exciting, and what is cool. The campaign, with its bold, vibrant visuals, is one the class felt people would look at, and pay attention to.”
Surf City Graphics first became involved in January 2014 with the R&D for the project. After the college completed its designs, Surf City Graphics used Abode Illustrator software to create the pre-press artwork. Surf City Graphics used its Roland Pro II printer/cutter to print on the 3M IJ180C V3 vinyl, protected with 3M’s 8518 gloss lamination, for the wall wraps and parking meters. For the floor wraps, Surf City Graphics utilized Sign Designs Vutek OS3220 printer to decorate the Asphalt Art media for the floor wraps. Altogether, 36 sq. ft. of vinyl was printed with two colors for each meter wrap location. Overall, Dmytrow estimates the company spent 30 hours in the R&D phase, including 10 hours to experiment with how to wrap a parking meter. After a procedure was standardized, two people could wrap a meter in 1.5-2 hours, while a solo artist would need 2.5-3 hours. Three of Surf City Graphic’s six employees actively wrapped the meters, using felt-tip squeegees, a propane torch, Olfa and X-Acto knives, denatured alcohol, microfiber cloths and shop towels. The three have 17 combined years of wrapping experience.
In business for six years, Surf City Graphics achieves 80% of its business is vehicle wraps and digitally printed signs. Other public work has included a full BBQ trailer wrap for the City of Long Beach Fire Department, South Coast Fire Protection district truck graphics, sponsor banners for the Huntington Beach High School lacrosse team, and retractable banner stands and a gym floor wrap for the school’s Music Guild. Surf City Graphics sponsored more then 40 children's DOC Band wraps through the Wrap Buddies program, Goldenwest college banner graphics and prints. 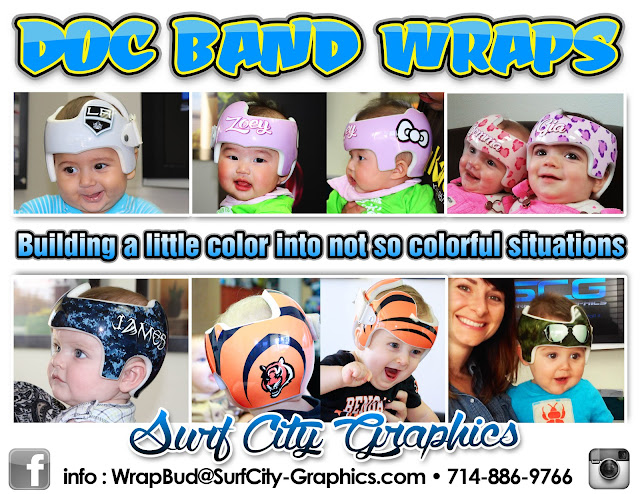 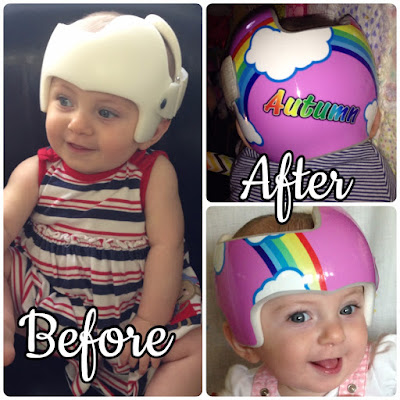 Drew Brophy inspired Full Truck Wrap. Printed and Installed In-House at Surf City Graphics. Original artwork and painting by Drew Brophy.
THE ART: Every image of Drew’s art begins life as a painting, created in his studio in San Clemente, California, or on the road during one of his traveling adventures.
Drew’s inspiration comes from the adventure of traveling and surfing the globe with his wife and son. He paints the lifestyle they live, one filled with peeling waves, sun-swept beaches and the simple joys that life has to offer.
Drew’s mission is “to inspire generations of people to live the life of their dreams.” He strives to be an example and show the world the good life through his artwork.
Drew’s mantra is “Life is Good,” and it is!

Source Interlink Media Motorsports came to us to wrap their 53’ semi truck. This wrap encompasses the highly successful GEICO AMA EnduroCross Championship Series. Source Interlink Media Motorsports brands reach millions of motorcycle enthusiasts with live events, DVD packages, web sites, television and magazine coverage. With this trailer wrap it will reach out to millions more on the road all over the U.S.A. www.minimotosx.com or www.endurocross.com.

Bike looks great @SailorJerry, @mackeyshotrods and @hbbicycleco!! Thank you Elogik Design and HBBC for the opportunity to print these decals out for you. It was a pleasure working with you. Looking forward to working with you again soon.
Posted by Surf City Graphics and Vehicle Wraps at 9:52 AM No comments: